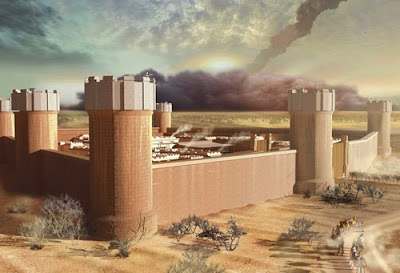 Artist's conception of the ancient fortress city of Ubar.
The ancient city of Ubar was important to the lucrative trade of frankincense from about 2800 BC till 300 AD when, according to legend, Allah rebuked its people for squandering their lives and then ~ like the Biblical story of Sodom and Gomorrah ~ destroyed the city by sinking it beneath the sand.

In the 1990s, amateur archaeologists Nicholas Clapp and Ranulph Fiennes made world headlines by discovering the fabled city.

They were led to Ubar by the book Arabia Felix by desert adventurer Bertram Thomas, the first European that crossed the Rub Al Khali, the unimpregnable vast sand desert that covers most of the southern part of the Arabian Peninsula. During his travels Thomas had noticed that the tribes living in the region of the Dhofar mountains in South Oman considered themselves the descendants of the "People of 'Ad", who were associated in the Qur'an with Ubar. When making his famous crossing of 'The Sands' he came across ancients caravan tracks at approximately 18°45'N -52°30'E that were explained by his Arab guides as 'the road to Ubar'.

Clapp got fascinated by the Ubar story and started reading everything he could lay his hands on. Fiennes had been stationed in Oman in his military time and had roamed around in southern Oman extensively, with the lost city always in the back of his mind . Both homed in on southern Oman and decided to find Thomas' tracks, reasoning that all roads must lead somewhere. They got help from space technology, with NASA shuttle space images revealing pieces of the ancient tracks and converging to the small oasis settlement of Shisur, which is now identified as Ubar.

Originally the fortress had eight or more towers, connected by a 2.5 to 3 metres high wall and almost one metre thickness, built of local limestone. The main internal building was in the northwestern corner of the fortress. The Qur'an tells of "a city with lofty buildings," which the excavations revealed. The towers guarded the most important source of water before the Rub Al Khali, now hidden in the collapsed sinkhole. 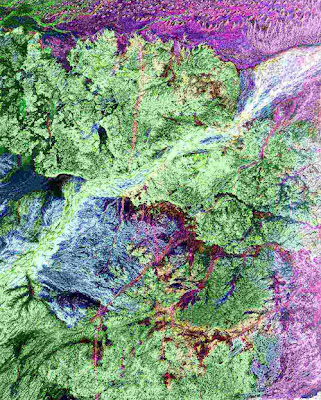 How can Allah have destroyed this ancient city, when he didn't pop out until 700AD???

Allah is literally Arabic for God.

Nice post.. After read this blog i have very good information regarding arabian gulf history..

Thanks for sharing such a valuable information ..