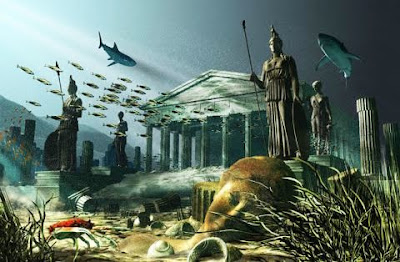 Artist's conception of Atlantis ruins.
The volcanic explosion that might have obliterated the legendary isle of Atlantis also triggered a tsunami that traveled hundreds of miles along the Mediterranean coast, scientists now suggest.

The islands that make up the small circular archipelago of Santorini ~ 120 miles southeast of Greece ~ are what remain of what once was a single island, before one of the largest volcanic eruptions in human antiquity occurred between 1630 BC and 1550 BC.

Speculation has abounded as to whether the Santorini eruption may have inspired the legend of Atlantis. The explosion might have given rise to the story of a lost empire by destroying the real-life Minoan civilization that once dominated the Mediterranean.

Now, researchers diving as far as 65 feet deep off the coast of Israel have collected tubes of sediment, or cores, from the seabed. Within the cores, they found evidence of up to nearly 16 inches of sediment deposited roughly about the date of the Santorini eruption.

The dramatic changes in life triggered by the tsunami "might have been part of the fabric of the Atlantis story," said researcher Beverly Goodman, a marine geoarchaeologist at Interuniversity Institute for Marine Sciences at Eilat, Israel.

Although Atlantis itself "is a myth and legend, it is informative about the experiences of the ancients," Goodman said.

"It may very well be the case that those passing the story on had heard of or witnessed events in which coastal buildings went underwater because of earthquakes; beachfront towns were flooded during tsunamis; islands were created by underwater volcanic activity. There may be that grain of truth that lent legitimacy and a certain reality to the legend of Atlantis."

To better reconstruct the Santorini tsunami, the scientists are planning to analyze deposits closer to the eruption, such as on Crete and in western parts of Turkey.

Click here for the LiveScience article.
Posted by Gregory LeFever at 3:55 PM