Pueblo May Be Linked to Lunar Standstill 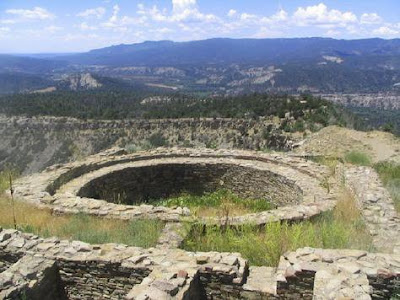 Remains of the Great House Pueblo at Chimney Rock.
Archaeologists are uncovering evidence that may explain the significance of the nearly thousand-year-old Great House Pueblo high atop Colorado’s Chimney Rock Archaeological Area in the San Juan National Forest.
"It's a chance to have a new look at this site, because archaeology has really advanced in the last few decades," San Juan National Forest Archaeologist Julie Coleman tells the Durango (Colorado) Herald.
The site has possible ties to the major lunar standstill, an astronomical phenomenon marking the end of the moon's northern migration cycle. Every 18.6 years from the vantage point of the Great House, the moon rises within a narrow window of sky framed by the rock spires that give Chimney Rock its name.
The most recent lunar standstill took place from 2004 to 2008, and the next opportunity will not occur until about 2022.
"Based on research from the 1970s, we do think it was constructed in time for the major lunar standstill in 1076, and we think it was rebuilt in time for the next lunar standstill in the 1090s," Coleman said.
Click here for the Durango Herald article.
Posted by Gregory LeFever at 1:12 PM