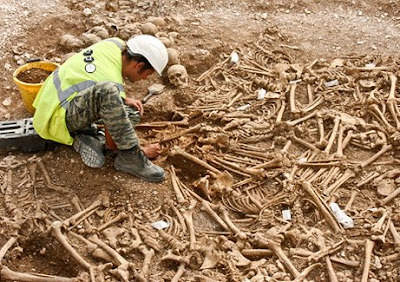 The burial pit with the remains of 51 warriors, presumably Vikings.
Archaeologists are pondering the discovery of 51 beheaded warriors in a burial pit in southern England, dating back at least 1,000 years. The slain men’s heads were found stacked neatly on one side of the pit.

The dead are thought to have been war captives, possibly Vikings, whose heads were hacked off with swords or axes, according to excavation leader David Score of Oxford Archaeology, an archaeological-services company.
Many of the skeletons have deep cut marks to the skull and jaw as well as the neck. "The majority seem to have taken multiple blows," Score said.
Unusually, no trace of clothing has been found, indicating the men were buried naked. Even if their weapons and valuables had been taken "we should have found bone buttons and things like that, but to date we've got absolutely nothing," Score said.

"They look like a healthy, robust, very strong, very masculine group of young males," he added. "It's your classic sort of warrior."