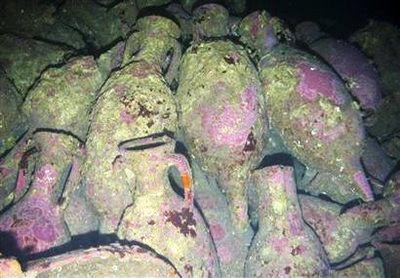 Some of the many jugs found in one of the Roman shipwrecks.
Archaeologists using sonar technology to scan the seabed have discovered five pristine ancient Roman shipwrecks near the Italian island of Ventotene.
The ships ~ dating from the first century BC to the fifth century AD ~ are 100 meters underwater and are amongst the deepest wrecks discovered in the Mediterranean .

"The ships appear to have been heading for safe anchorage, but they never made it," said Timmy Gambin, head of archaeology for the Aurora Trust. "So in a relatively small area we have five wrecks...a graveyard of ships."
The vessels were transporting wine from Italy, prized fish sauce from Spain and north Africa, and a mysterious cargo of metal ingots from Italy, possibly to be used in the construction of statues or weaponry.

Images of the wrecks show their crustacean-clad cargoes spilling onto the seafloor, after marine worms ate away the wooden hull of the vessels.

Click here for the complete Reuters article.
Posted by Gregory LeFever at 9:35 AM