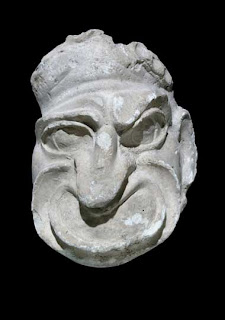 Fifteen mysterious life-size masks, reminiscent of ancient Roman drama, have been rediscovered in Pompeii after being forgotten for more than two centuries.

Made of plaster, they were unearthed in 1749 in Pompeii during the excavations promoted by King Charles of Bourbon, then were deposited in the Royal Palace of Portici on the Bay of Naples.

"They ended up being totally forgotten, and indeed we do not have much information about them,” Mariarosaria Borriello, the scholar who rediscovered the masks, told Discovery News. “We do not even know where they were unearthed in Pompeii.”

Some of the masks have their mouth shut, a clear indication that they were used as models for a craftsman who then produced lighter masks for actors to wear.
Click here for the complete Discovery News article.
Photo above shows one of the rediscovered masks, likely a model for theatrical masks used by actors of the day.
Posted by Gregory LeFever at 12:36 PM

i am researching pompeian actors at the minute and I found this artical very interesting.
It's amazing that they have found these masks after all this time!