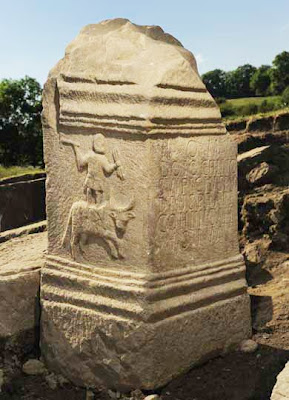 The stone relic depicts a god-like figure on the back of a bull, holding an ax and thunderbolt.

A massive altar dedicated to an unknown deity has been unearthed in northern England. At nearly two tons, the four-foot high, ornately carved stone relic was unearthed at the Roman fort of Vindolanda, built by order of the Emperor Hadrian between 122-30 A.D.

"What should have been part of the rampart mound near to the north gate of the fort has turned out to be an amazing religious shrine," said archaeologist Andrew Birley.

A jar and a shallow dish are depicted on one side of the altar. The other side shows a god-like figure standing on the back of a bull, with a thunderbolt in one hand and a battle ax in the other. According to Discovery News:

Romans called this god Juppiter Dolichenus, but it was originally an ancient weather god, known to the Semitic peoples of the Middle East as Hadad and to the Hittites as Teshab. It was in its war-like representation that the Anatolian god Juppiter of Doliche became a favorite deity among Roman soldiers.

Indeed, an inscription indicates that the altar was dedicated to the Dolichenus god by "Sulpicius Pudens, prefect of the Fourth Cohort of Gauls."

According to Birley, Sulpicius Pudens was the commanding officer of the Roman regiment based at Vindolanda in the Third century and he may have dedicated the expensive stone to the god in thanks for fulfilling a vow. This was a normal practice, as partial inscriptions from badly damaged Dolichenus shrines, all found in England, testify.

"The Vindolanda shrine is unique as it is situated within the walls of the fort, something which has yet to be encountered elsewhere. This casts new light on ritual spaces inside Roman forts," Birley said.