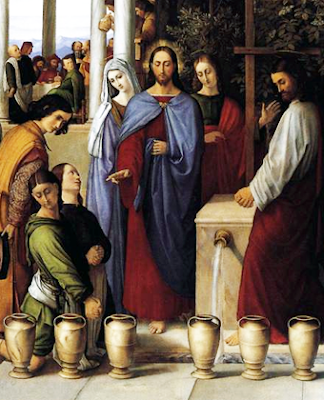 Depiction of Jesus's first Biblical miracle, transforming water into wine at the wedding in Cana.
The recent discovery of an ancient bowl bearing a reference to “Christ” could be the earliest known reference to Jesus Christ. Researchers think the meaning of the words engraved on the bowl ~ Dia Chrstou O Goistais ~ could link the bowl and the Christ reference to supernatural practices.

Researchers say the phrase translates to either “by Christ the magician” or to “the magician by Christ.”

The bowl dates somewhere between the late 2nd Century BC to early 1st Century AD and was found during an underwater excavation of ruins in the harbor of Alexandria, Egypt. A team of scientist led by renowned French marine archaeologist Franck Goddio discovered it near the submerged island of Antirhodos.

The bowl is very similar to one depicted in two early Egyptian earthenware statuettes that are thought to show a soothsaying ritual.

"It could very well be a reference to Jesus Christ, in that he was once the primary exponent of white magic," Goddio, co-founder of the Oxford Center of Maritime Archaeology, said. He and Egyptologist David Fabre, a member of the European Institute of Submarine Archaeology, think a "magus" such as mentioned in the Matthew gospel could have practiced rituals using the bowl.

"It has been known in Mesopotamia probably since the 3rd millennium BC," Fabre said. "The soothsayer interprets the forms taken by the oil poured into a cup of water in an interpretation guided by manuals." The magus or medium then goes into a trance when studying the oil in the cup.

"They therefore see the divinities, or supernatural beings appear that they call to answer their questions with regard to the future," he said. A magus might have used the engraving on the bowl to legitimize his supernatural powers by invoking the name of Christ, the scientists theorize. 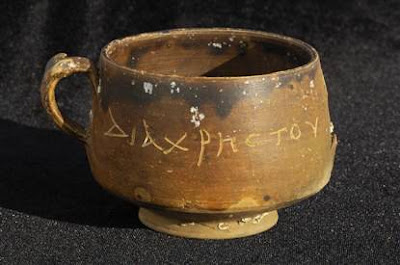 The bowl, found submerged in the bay of Alexandria, with the engraved words translating to either "by Christ the magician" or "the magician by Christ."

Posted by Gregory LeFever at 11:02 AM

Hey, that's where my old coffee mug went! It must have disassembled its molecules and gone into another dimension, and in its attempt to return to me, ended up there! It actually says "by Christine the magician" because I used it when I was at the Magic of Oregon and the Magic of Christmas shows and thought that would be an appropriate label. My scrawling has gotten pretty awful, hasn't it?