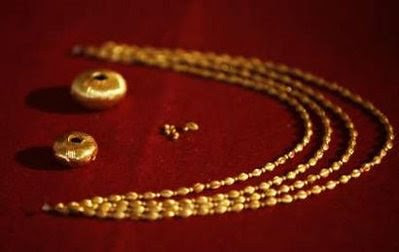 The 4,000-year-old gold jewelry went on display for the first time this week in Sophia, Bulgaria.
A treasure in gold jewelry discovered in Bulgaria is now being put on display after archaeologists kept it secret to protect it from theft. The trove includes 355 gold beads and two gold jewelry spindles, all dating from about 3000 BC.

Borislav Borislavov, who discovered the treasure, says that the find is of major significance for archeology.
"These are objects dating from a period that is the least known, not only in Bulgarian, but in European history,” he said. “The discovery proves that in south Thrace a civilization comparable to the Aegean one has existed."

The gold items were discovered in a tomb near the town of Harmanli in southeastern Bulgaria and until now have been kept secret by the archeological team, the National History Museum, and the Culture Ministry due to fear of treasure hunters. The items were found during an excavation of a Bronze Age mound there.

The treasure was put on display this week at the National History Museum in Sofia. Meanwhile, the archeological team continues to work in the location of the tomb where more objects ~ such as a bronze knife and grindstone ~ also have been found.
(Thanks to my good friend, Ludmil Marcov, formerly of Bulgaria and now of Texas, for alerting me to this article!)

Posted by Gregory LeFever at 11:18 AM

Bulgaria is situated on the crossroads and many sivilizations left their artifacts under the protection of Mother Earth.Unfortanedly as lately there is a race against the clock to discover them fast and illigally.Most offten the tomb-raiders called with the local name"imaniar"/from turkish "imane"-treasure/are ahead of the schollars ,who are underfunded and lack the top-noch deep panatrating metal detectors and scanners.They work with network,they are fast and they are after the presious metals.In the process the valuble surrounding strata is tossed aside and trample on.History is irreversible lost.After fact the schollars can piece together and catalog the remaining artifacts.When Bulgaria was under the Comunism rule there was a steady funding for the Archaelogy,part of the rulling fillosofy to show-off the treasures of the land ,and well founded pride of national indentity.There were penalties against looting and the locall comunities were guardians of the local coltural landmarks.I worked for Institute of Coltural Monuments and Preservation who was with National Archaelogical Institute in charge of documenting and preserving the sites.Back than was even illigal to own a metal detector.There were a small scales looting,basically to suply the demand of local coin -collectors market,but nothing like now.I have read a exselent article on the subject Gregory in "Der Spiegel" ,and i would like to share it with your readers.After something is being looted,the artifacts are on the way to a black markets in Western Europe-mostly Germany.Here is what a german journalist and investigator found on the subject
Bulgaria Plagued by 'Grave Robbers'

From an archaeological point of view, Bulgaria has some of the richest digs around. The problem is, plunderers are aware of the valuable treasure as well. And they often get there first.

The display cabinets of the Bulgarian National Art Gallery in Sofia are full to bursting with antique treasures. Many of them are masterpieces of antique craftsmanship: filigree leaves of the finest gold woven into a laurel wreath like those worn by the Roman Caesars; or a heavy knee-protector fashioned in silver with decorative designs in gold, printed with the wearer’s rank and authority, produced in the 3rd or 4th century BC.

Archaeologists, recently, have time and again uncovered treasures from Bulgaria’s varied history. At a dig near the central Bulgarian city of Kazanluk in the summer of 2005, a team led by the archaeologist Georgi Kitov discovered a mask of pure gold which had been worn by one of the most powerful rulers in the Thracian dynasty -- Teres, the 5th-century founder of a prosperous empire.

In mid-July, Kitov's team dug up a second gold death mask 85 kilometers east of the city of Sliven, in Bulgaria's southeast. The tomb of this Thracian ruler also held ritual vessels and valuable ceramics.

"Many of the most important civilizations settled in Bulgarian territory," says Bozhidar Dimitrov, director of the Bulgarian National Museum of History. Greeks, Macedonians, Romans, Byzantines, Bulgars and above all the legendary Thracians, one of the most powerful peoples of the ancient world -- all of them have lived in what is now Bulgaria. "Just about every square meter of Bulgarian soil conceals valuable findings," Dimitrov enthuses. "Bulgaria is paradise for archaeologists."

But Dimitrov, Kitov and their colleagues have competition. Plunderers systematically ransack the soils in this Balkan country in search of antique coins, cast metal statues and pottery vessels. A battle has begun between raiders and scientists to be the first to find the treasures of the past.

"The looters have the most up-to-date technology and good off-road vehicles. They are very mobile and extremely well informed," says Sofian archaeologist Nikolai Markov. "Our rivals are certainly no amateurs and their modus operandi points to criminal gangs at work."

FROM THE MAGAZINE
Find out how you can reprint this DER SPIEGEL article in your publication.
Volodia Velkov heads a 30-person specialist unit responsible for the fight against the organized robbery and trafficking of archaeological treasures. "In the area surrounding ancient settlements, local crews are hired for a few Lev to dig up whatever’s there. It’s a well-paid job for anyone who would otherwise be living in poverty," explains Velkov. Anything they find is then given to middlemen who try to get the valuable booty across the border as quickly as possible.

Velkov says that most buyers of the ancient treasures are abroad, for instance in Germany or Austria. According to German investigators, a battery of shady antique dealers who also deal in stolen goods from the Balkans has set up shop in Munich in recent years. Bulgaria, even more than Italy or Greece, is currently the most important supplier of valuable artifacts from the ancient world, says Neil Brodie, Research Director of the Illicit Antiquities Research Center in Cambridge, England.

Bulgarian experts have even on occasion discovered suspected stolen goods in the catalogs of international auction houses. Last year, for example, Christie's in London had a rare Byzantine silver bowl from the 12th century, richly decorated with striking hunting motifs, on sale. The piece was valued at €448,000 ($645,000).

The Bulgarian Culture Ministry demanded that the object be returned to Bulgaria and the London dealer was, as a result, unable to find a buyer. But instead of turning the disputed antique over to the authorities, it was given back to the auction house client, a private citizen who, think experts in Sofia, had presumably bought the expensive piece on the international black market. The man denies the allegations.

It was 36-year-old Naiden Blangev who called the Bulgarian authorities' attention to the sale in the first place. Blangev claims to have dug up the artifact seven years ago near the southern Bulgarian city of Pazardzhik, before selling it. He says he found the bowl using a standard metal detector -- "beginner's luck," he calls the find.

But the bowl put up for auction in London is one of 13 similar pieces, say the experts in Sofia. The set is dispersed among different countries, with nine of the silver dishes apparently in Greek museums. The authorities want all of the silver treasures back and are prepared to bring the case before the international courts, if necessary.

Meanwhile Boris Velchev, Bulgaria's energetic prosecutor general, has declared war on organized crime, particularly the lucrative trade in stolen art. Now, hardly a week goes by without his investigators uncovering yet more valuable stolen goods. Just this month, seven men were caught near Sliven with a hoard of ancient coins. In a spectacular sting on a train headed for the Serbian border, investigators succeeded in catching the gang of three trying to leave the country with thousands of antique pieces. The valuable goods were hidden in cardboard cartons full of fruit juices.

Velkov’s worry is that hauls on this scale could become ever scarcer in the future. Since Bulgaria became an EU member, its borders have become more permeable, making life easier for the looters.

'The Fruit of Grave Robbing'

According to a new study conducted by the Bulgarian Center for the Study of Democracy, as many as 250,000 people may be involved in illegal racketeering. Some are even brazen enough to put their pieces on show. The most controversial is casino king Vassil Bozhkov, 51, nicknamed "The Skull", who, in addition to countless gambling houses in Sofia, also runs the popular betting agency Eurofootball. He has already survived one assassination attempt, while one of his closest business partners was killed by a gunman.

In his private life, the millionaire indulges in a very specialized passion: He has collected hundreds of Roman, Greek and Thracian works of art and his coin collection is one of the most extensive in the country.

To coincide with Bulgaria's admission into the EU, Bozhkov was invited to exhibit a number of examples of his collection in the EU Parliament in Brussels; he even obtained funding for the exhibition from the Bulgarian Culture Ministry. In the eyes of Vassil Nikolov, the Bozhkov exhibition was "the fruit of grave-robbing." Nikolov was not only the long-time director of the Institute of Archaeology and Museum in Sofia, but was also president of the state committee responsible for every single archaeological dig that took place in the country. Without his signature, not even the smallest shovelful of historical earth could be moved -- or at least not officially.

But unofficially is a different story: "There is not a single dig site or historical monument in the country," says Nikolov, "that has never been looted." Thank you Gregory for sharing the treasures of the ancient Thrace land with your readers. Ludmil