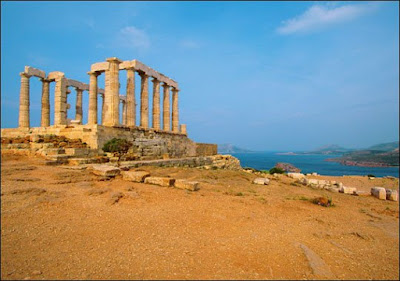 This ancient Greek temple to the sea god Poseidon was built near a harbor with arid soil.
Ancient writers such as Homer and Plato wrote of “divine soil” capable of affecting a person’s soul, and now modern research explains what they could have meant. It seems certain temples were built on soil that held some meaning for the god or goddess the temple honored.

"Temple sites were chosen to honor the personality and aspirations of gods and goddesses, which, in turn, were shaped by the economic basis for their cults," author Gregory Retallack of the University of Oregon told Discovery News.

He sampled the soil from 84 Greek temple sites dating from 480 to 338 BC and created a profile for the soils, naming their characteristics and how they might have been used at the time.

The soil appeared to be directly connected to the mythology surrounding the god or goddess honored by the particular temple. Buildings dedicated to Athena and Zeus, for example, were erected on soils of citadels. "These are the god and goddess of warrior societies, and their temples are mostly on or near easily defensible hills, with evidence of long prior occupation," Retallack says.

Temples dedicated to Artemis and Apollo ~ associated with hunting ~ were located on likely former hunting grounds. Hera and Hermes buildings sat atop clay-rich soil that would have been suitable for cattle grazing, in keeping with "Hermes the ram-bearer" and "ox-eyed queen Hera."

His findings are published in the latest issue of Antiquity.