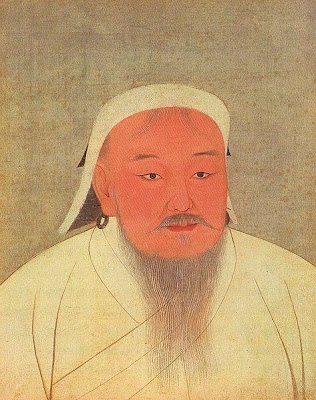 Image of Genghis Khan from the 14th Century at the National Palace Museum in Taipei.
Scientists are using high technology in an attempt to locate the tomb of Genghis Khan, which his followers went to great lengths 800 years ago to conceal. Somewhere in the steppes of northeastern Mongolia, they buried their leader, trampled the ground with horses and then diverted a river to flow over the tomb.

Researchers from the University of California San Diego's Center for Interdisciplinary Science in Art, Architecture and Archaeology (CISA3) are hoping to use advanced visualization and analytical technologies to conduct a non-invasive archaeological analysis of the area where Khan is believed to be buried.

Khan's grave is presumably in a region bordered by Mongolia's Onon River and the Khan khentii mountains near his birthplace in Khentii Aimag. Some experts believe his sons and other family members were later buried beside him.
Forbidden Site Until Recently

Directly following Khan's death in 1227, the area around his tomb was deemed forbidden by the emperor's guards, In the 20th century, Russian occupation officials prohibited Mongolians from even talking about Genghis Khan because they felt it might lead to nationalist uprising. Only since the 1990s have researchers been allowed in the area, and several other research teams have tried unsuccessfully to locate the tomb.

"If you have a large burial, that's going to have an impact on the landscape,” says Dr. Albert Yu-Min Lin, an affiliated researcher for CISA3. “To find Khan's tomb, we'll be using remote sensing techniques and satellite imagery to take digital pictures of the ground in the region, which we'll be able to display on a 287-million pixel display wall.”

"Once we've narrowed down this region to a certain area, we'll use techniques such as ground penetrating radar, electromagnetic induction and magnetometry to produce non-destructive, non-invasive surveys,” Lin said. “We'll then work with people in UCSD's electrical engineering department to develop visual algorithms that will allow us to create a high-resolution, 3-D representation of the site."

Despite the technologies and expertise available, Lin says he is aware of the challenges the project poses. "One consistent fact is that there is no fact," he said. "It's a story of secrets upon secrets and myths upon myths.”

Click here for the Science Daily article.
Posted by Gregory LeFever at 1:15 PM

Besides creating one of the greatest empires in the human history/from Caspian sea to Sea of Japan/Genghis Khan had a few very interesting traits.His empire was one of the most ethnically diverse in the history.He parted with the old Mongolian custom to create unions and alliances based on family ties created through marriages.His approach was based on favouring merit and loyalty.True meritocracy.He came up with sacred written code of laws and principals called Yasa.Soldiers and civilians obeying Yasa and being loyal were guaranteed to get the spoils of the battles.After defeating one tribe after another he adopted and treated them equally in his growing kingdom.This inspired great loyalty and making him stronger with every victory.Among nomadic Mongol-Turkic tribes of Central Asia the prevalent religion back then was Shamanism and Tengrism/sky-deity/.Genghis Khan was very open to learn from other religions.He had a contacts with Christian missionary,Muslim caravan travelers and Taoists.He was very tolerant toward other religions.About 6% in today Mongolia are practicing Shamanism.The dominant religion is Buddhism.According to the legend the funeral escort of Genghis Khan killed anyone across their path to conceal the burial.Finding his grave would be archaeological event of the century.I wish the expedition luck in finding it,and great hope that the high-tech equipment will deliver it.It will be fascinating to find a grave 781yr.old , besides the extreme measures were taken to concealed it from the rest of the World.Talk about finding a needle in a hay-stack!!!

Thank you for the interesting insights, Ludmil. I remember being in 5th grade and reading "Genghis Khan and the Mongol Horde," which described him as a murderous and cruel barbarian whose bloodthirsty followers swept across Asia committing hideous acts. At least that's my recollection after several decades.

That's why it's particularly enlightening to learn that the man inspired loyalty through treating those he conquered with fairness and understanding. Now he seems far different than the evil man I learned about.

Yes, it'll be interesting to see if the scientists with all their high-tech gadgetry can actually locate the tomb and, if so, what condition it's in.

Thanks for the insight

It is very likely, not there looking for the tomb of Genghis Khan - that's it, and cannot find it. Very likely, it is in other part of Eurasia. As a matter of fact, most of the descendants of Genghis Khan and his native nation now living among Bashkirs, Kazakhs,Tatars, Uighurs and other Turkic peoples. Read a book "Forgotten Heritage of Tatars" (by Galy Yenikeyev) about the hidden real history of Tatars and their fraternal Turkic peoples.This book you can easily find on Smashwords company site: http://www.smashwords.com/books/view/175211
There are a lot of previously little-known historical facts, as well as 16 maps and illustrations in this book, and well-grounded rebuttal of the chinese-persian myths about "incredible cruelty of nomadic mongol-tatar conquerors", and about "a war between the Tatars and Genghis Khan” etc.

This book presents a new, or rather "well-forgotten old" information about the true history of the medieval Tatars – the native nation of Genghis-Khan.

On the cover of this book you can see genuine appearance of Genghis Khan. It is his lifetime portrait, which is very little known. Notes to the portrait from the book say: \"...In the ancient Tatar historical source «About the clan of Genghis-Khan» the author gives the words of the mother of Genghis-Khan: «My son Genghis looks like this: he has a golden bushy beard, he wears a white fur coat and goes on a white horse...» [34, p. 14].