Scientists keep edging closer to determining the who, what and why of the Antikythera Mechanism recovered from an ancient shipwreck near Crete in 1901. 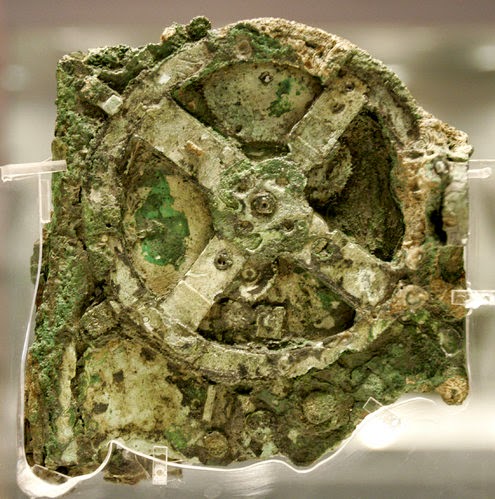 So far, we know the strange, complex assembly of bronze gears could accurately predict lunar and solar eclipses and tell the positions of planets throughout the solar system.

According to the New York Times:

Now a new analysis of the dial used to predict eclipses, which is set on the back of the mechanism, provides yet another clue to one of history’s most intriguing puzzles.


Christián C. Carman, a science historian at the National University of Quilmes in Argentina, and James Evans, a physicist at the University of Puget Sound in Washington, suggest that the calendar of the mysterious device began in 205 B.C., just seven years after Archimedes died. The mechanism was most likely housed in a wooden box and operated by a hand crank. The device itself bears inscriptions on the front and back. In the 1970s, the engravings were estimated to date from 87 B.C. But more recently, scientists examining the forms of the Greek letters in the inscriptions dated the mechanism to 150 to 100 B.C.

Over the years scientists have speculated that the mechanism might have been somehow linked to Archimedes, one of history’s most famous mathematicians and inventors. In 2008, a group of researchers reported that language inscribed on the device suggested it had been manufactured in Corinth or in Syracuse, where Archimedes lived.

Click here to read the article.
Posted by Gregory LeFever at 1:05 PM

Thank you for the interesting blog post on history. We have come across one of the greatest discovery of history. It is really an informative blog.