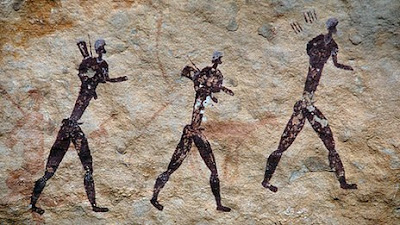 
Researchers have uncovered the first genetic evidence for prehistoric gene flow between Africa and Europe, as far back as 11,000 years ago. This evidence predates better known migrations between Africa and Europe during the Roman Empire, Arab conquest and the slave trade.
To trace human ancestry, scientists study the DNA sequence of the mitochondria, a specialized cellular structure that produces energy for the cell and carries genetic information separate from the rest of the genome that resides in the nucleus. While the nuclear genome is a mix of genetic information from both mother and father, the mitochondrial DNA (mtDNA) is passed directly from mother to child without any contribution of DNA from the father. Geneticists can use these changes as markers that indicate the movements and migrations of humans in the past, and classify them into specific "haplogroups."
According to Genome Research:

"It was very surprising to find that more than 35 percent of the sub-Saharan lineages in Europe arrived during a period that ranged from more than 11,000 years ago to the Roman Empire times," said Dr. Antonio Salas of the University of Santiago de Compostela and senior author of the study. The other 65 percent of European haplogroup L lineages arrived in more recent times.

The authors explain that these contacts likely connected sub-Saharan Africa to Europe not only via North Africa, but also directly by coastal routes. Salas said it remains unknown why there was genetic flow between the Africa and Europe in prehistoric times, but one possible scenario is that some bidirectional flow was promoted when the last glaciation pushed some Europeans southward, until the glacier receded and populations returned north.
Click here for the complete article.
Posted by Gregory LeFever at 4:28 PM