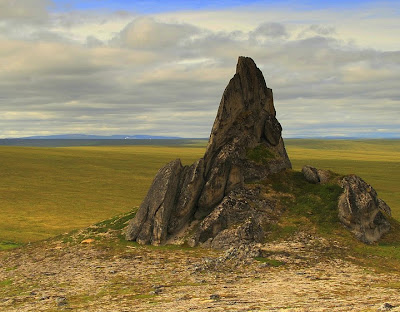 Tor overlooking an expanse of the Bering Land Bridge.
Recent genetic studies are confirming what scientists have long suspected about the origins of Native Americans ~ their genetic source is in Asia, specifically a mountainous area in southern Siberia known as the Altai region.
The new studies are from the University of Pennsylvania and the Institute of Cytology and Genetics in Novosibirsk, Russia. Researchers say the natives of Altai probably migrated across the Bering Land Bridge to North America.
Altai is located at the four corners of what is today China, Russia, Mongolia, and Kazakhstan. Says research leader Theodore Schurr of the University of Pennsylvania: "It is a key area because it's a place that people have been coming and going for thousands and thousands of years. Our goal in working in this area was to better define what those founding lineages or sister lineages are to Native American populations."

The team analyzed the genetics in both mitochondrial DNA and Y chromosome DNA, comparing samples to those that had previously been collected from individuals in southern Siberia, East Asia, Central Asia, Mongolia, and a number of different Native American groups.

Researchers have concluded that the Altaian lineage diverged genetically from the Native American lineage about 13,000 to 14,000 years ago. This correlates with current theories that support the migration of peoples into the Americas from Siberia between roughly 15,000 and 20,000 years ago.
Click here for the complete article.
Posted by Gregory LeFever at 1:00 PM