Nebuchadnezzar Shows Up on Babel Stele 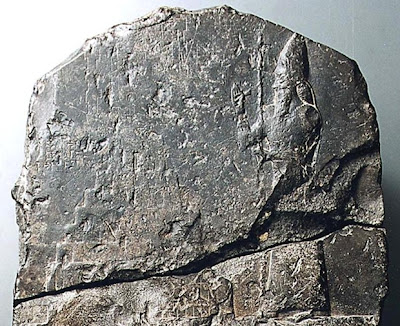 Carving of Nebuchadnezzar is clearly visible on the right.
A team of scholars has discovered what might be the oldest representation of the biblical Tower of Babel. The inscription was carved between 604 and 562 BC on a black stone named the Tower of Babel stele.
The Tower of Babel stele stands out as one of "the stars in the firmament of the book," according to Andrew George, a professor of Babylonian at the University of London. The spectacular stone monument clearly shows the Tower and King Nebuchadnezzar II, who ruled Babylon some 2,500 years ago.
Credited with the destruction of the temple of Solomon in 586 BCE, Nebuchadnezzar II was also responsible for sending the Jews into exile, according to the Bible. The first Babylonian king to rule Egypt, he is also famous for building the legendary Hanging Gardens, one of the 7 wonders of the ancient world, and many temples all over Babylonia.
Click here for the complete article.
Posted by Gregory LeFever at 2:07 PM