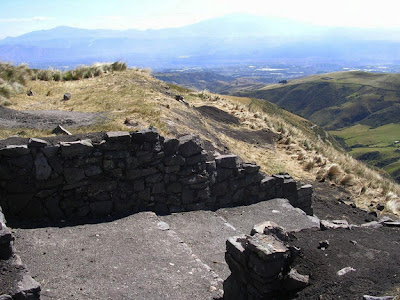 A gate of the Incan fortress of Quitoloma.


Archaeologists in northern Ecuador have discovered evidence of an Incan war with a neighboring people as part of excavation of two fortresses built 500 years ago. “We're seeing evidence for a pre-Columbian frontier, or borderline, that we think existed between Inca fortresses and Ecuadorian people's fortresses,” Samuel Connell of Foothill College in California, told LiveScience.
The team has identified an estimated 20 Inca-built fortresses and two forts built by the Cayambe, an Ecuadorian society. “We know that there are many, many fortresses throughout northern Ecuador that haven't been identified one way or the other," said Chad Gifford, of Columbia University, also a project director.
According to LiveScience.com:

The discoveries suggest that there is a ring of truth to stories that Spanish chroniclers told when they penetrated into South America during the 16th and 17th centuries. According to these stories, Incan ruler Huayna Capac sought to conquer the Cayambe. Using a “very powerful army,” he was hoping for a quick victory but ended up getting entangled in a 17-year struggle.

“Finding that their forces were not sufficient to face the Inca on an open battlefield, the Cayambes withdrew and made strongholds in a very large fortress that they had,” wrote Spanish missionary Bernabe Cobo in the 17th century. “The Inca ordered his men to lay siege to it and bombard it continuously; but the men inside resisted so bravely that they forced the Inca to raise the siege because he had lost so many men."

Finally, after many battles, the Inca succeeded in driving the Cayambe out of their strongholds and onto the shores of a lake.

The newly discovered Inca fortresses are built out of stone, contain platforms called ushnus, and are located on ridges about 10,000 feet above the ground.
Click here for the complete article.
Posted by Gregory LeFever at 10:04 AM

Thats an interesting post. It was worth visiting your blog and I have bookmarked your blog. Hope to visit again.

I would like to say this is an excellent blog that I have ever come across. Very informative. Please write more so that we can get more details.