Mayan Temples Could Have Been Amplifiers 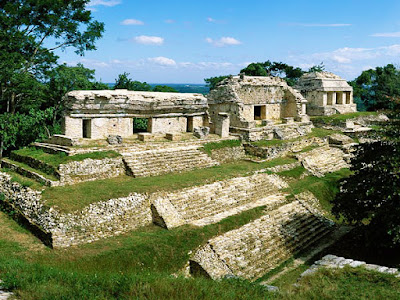 Temples in the northern section of Palenque ruins.


Ancient Mayan buildings may have been design to amplify sounds to either enthrall or disorient audiences. Temples at the Mayan city of Palenque in central Mexico, for example, might have formed a kind of acoustic public-address system, projecting sound across great distances, according to a team led by archaeologist Francisca Zalaquett of the Unisersidad Nacional Autonoma de Mexico.
According to National Geographic:

Zalaquett's team recently discovered that Palenque's Northern Group of public squares and temples—built around roughly A.D. 600—is especially good at projecting the human voice as well as sounds like those that would have been made by musical instruments found at the site.

Performers and priests may have stood atop these temples or in specialized projection rooms, which still exist, to broadcast songs and chants throughout the squares. The Maya are known to have to held public rites to commemorate enthronements, births of nobles, and war victories as well as to honor deities, Zalaquett said.

The acoustics may have even been purposely enhanced by the strategic application of stucco coatings, Zalaquett's findings suggest. Measurements at some of the buildings still bearing stucco suggest it may have changed the absorption and reflection of sounds.
Click here for the complete article.
Posted by Gregory LeFever at 5:31 PM