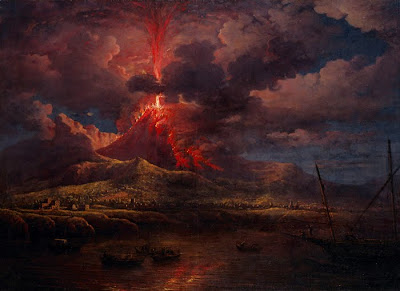 Many Pompeii residents who died in the 79 AD eruption of Vesuvius were roasted to death instead of dying by suffocating in ash, as is commonly thought. New research indicates temperatures hit nearly 600 degrees (300 Celsius).
A new Italian study uses digital models of the eruption’s pyroclastic surges to compute size, density and velocity, as well as analyzes human remains. According to Heritage Key:

Most of Pompeii's inhabitants who survived the early phase of the eruption, during which buildings collapsed, died by exposure to extreme heat, according to the Italian study.  A hot mixture of fine ash and hot gas came flowing down the volcano's slopes, a raging current which caused numerous fatalities at Pompeii, about 10kms from the volcano's vent. The researchers found that even at the flow's termination point, temperatures of over 250°C (482°F) caused instant death.

The 79 AD Vesuvius eruption caused six major pyroclastic surges and flows, each increasing in power. The three early surges stopped ahead of Pompeii's north-western walls, while the three later surges passed over the town. Although less powerful than the last two surges (whose reach extended more than 15 km from the vent), and in spite of little material damage and an ash deposit of only 3cm, the fourth pyroclastic surge (S4) caused most of the fatalities at Pompeii.

Researchers attribute many of the bodies seemingly frozen in action to “cadaveric spasm,”

Often associated with violent death, it means an instantaneous rigor occurs, crystallizing the last activity prior to death. Cadaveric spasm commonly involves only groups of muscles. Only exceptionally – for example in battle situations, due to exposure to extreme heat – would it affect the entire body.

Seventy-six per cent of the victims showed limb contraction while a 'pugilistic attitude' (limb flexures that result from dehydration and shortening of tendons and muscles) was found in 64% of the S4 casualties. Both post-mortem postures are generally observed as secondary effects in victims exposed to extremely high temperatures, and according to the authors, wrongly attributed to attempts at self-defence by previous studies.

Researchers add that being literally cooked alive may have been a quick death. “At Pompeii, a rise of temperature to more than 250°C in less than 30 seconds, would have (hopefully) heated the victims brains to a point of unconsciousness within a few seconds, as well as instantly boiled the victims' nerve endings,” the article states. 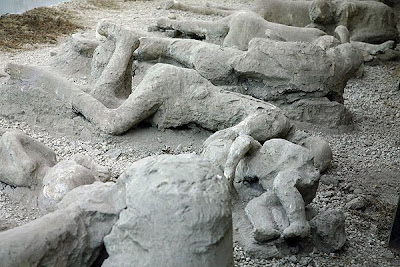