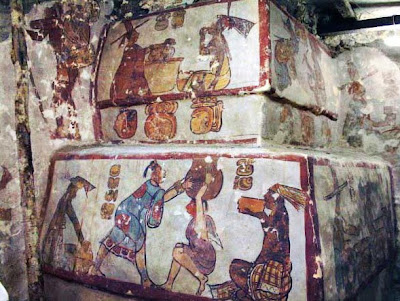 One of the murals decorating the Maya pyramid structure.
Recently excavated Mayan murals are providing a window into the lives of ancient Mayan culture.

Uncovered during excavation of a Mayan pyramid at Calakmul, Mexico, discovery of the murals "was a total shock," Simon Martin of the University of Pennsylvania Museum told LiveScience. The Maya have been studied for more than a century, but "this is the first time that we've seen anything like this," Martin said.

"We almost never get a view of what other layers of society are doing or what they look like, so this is one of the things that makes [the murals] so special," Martin told LiveScience.

The murals were found on the walls of one layer of the mound structure - Maya built over the top of older structures, creating buildings in layers like onions, Martin explained. While other layers were scraped up and destroyed in the effort to build over them, the layer with the murals appears to have been carefully preserved, with a layer of clay put over the murals, ostensibly to protect them.

This careful preservation "might suggest that it was something pretty special," Martin said.

The images on the mural show people engaged in mundane activities, such as preparing food. Hieroglyphic captions accompany each image, labeling each individual. In each case the term "aj," meaning "person," is used and followed by the word for a foodstuff or material.

Hieroglyphs for some words ~ such as "tobacco" and "maize-gruel" ~ were already known. Other hieroglyphs were new to researchers, especially the words for maize itself and salt, known staples of the Mayan diet.

Click here for the LiveScience article.
Posted by Gregory LeFever at 2:11 AM