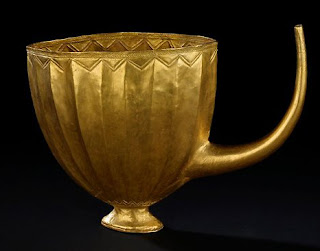 The slender spout on a 4,500-year-old golden beer mug from ancient Mesopotamia was designed to filter out unwanted particles, according to researchers assembling a collection of period artifacts for public display.

The cup is the centerpiece of Melbourne Museum's latest international exhibition, the Wonders of Ancient Mesopotamia. The exhibition showcases more than 170 artifacts on loan from the British Museum, charting the history of one of the world's oldest civilizations, dating back as far as 2600 BC.
The cup was recovered from the "death pit" of Queen Puabi in the ancient city of Ur, in modern day Iraq, during an excavation led by archaeologist Leonard Woolley between 1922 and 1934. It was found in the royal cemetery amid precious jewels, musical instruments, containers once laden with food, and other riches.
"This is really rather unique,” British Museum exhibition curator Sarah Collins said. “So far archaeology hasn't uncovered tombs or riches quite like this. It's certainly a very spectacular example of the Sumerians' belief and burial and afterlife practices.
Click here for complete article.
Posted by Gregory LeFever at 11:05 AM