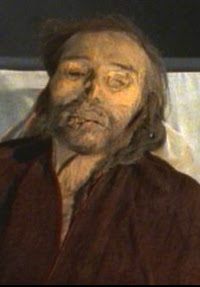 The mummy is that of a Bronze Age Celt, according to his DNA, but the mummy of Cherchen Man is from the Taklamakan Desert in western China. In the local Chinese language, the word “taklamakan” means “You come in and never come out.” And that seems to be the case.
According to Britain’s The Independent:

He looks like a Bronze Age European. In fact, he's every inch a Celt. Even his DNA says so.

But this is no early Celt from central Scotland. This is the mummified corpse of Cherchen Man, unearthed from the scorched sands of the Taklamakan Desert in the far-flung region of Xinjiang in western China, and now housed in a new museum in the provincial capital of Urumqi.

The extraordinary thing is that Cherchen Man was found - with the mummies of three women and a baby - in a burial site thousands of miles to the east of where the Celts established their biggest settlements in France and the British Isles.

DNA testing confirms that he and hundreds of other mummies found in Xinjiang's Tarim Basin are of European origin. We don't know how he got there, what brought him there, or how long he and his kind lived there for. But, as the desert's name suggests, it is certain that he never came out.

His discovery provides an unexpected connection between east and west and some valuable clues to early European history. The bodies are far better preserved than the Egyptian mummies, and it is sad to see the infants on display; to see how the baby was wrapped in a beautiful brown cloth tied with red and blue cord, then a blue stone placed on each eye. Beside it was a baby's milk bottle with a teat, made from a sheep's udder.
Click here for the complete article.

Posted by Gregory LeFever at 4:48 PM

The tocharian male mummies all to-date have tested as being R1a Hg, according to every source that I have seen. All R1a who are pehnotypically europid in appearance are related to Slavic or 'corded ware' populations that were precursors to Slavic populations.

Thus, they would not be 'identical' to ancient celts at all... they would be ethnically closer to Slavic male populations of today.

All 'Celt' populations from either the continent of Europe or the Brythonic Isles populations all consist almost completely of R1b-m269 paternal DNA,

so either these tocharian celt-artifact burials show that R1b split off from R1a later that the Tocharian founding population,
or it means that what is today considered 'celtic' clothing/artifacts may have crossed most or all europid populations at one point in time, and the tartan-cloth is simply a commonality that once was shared by slavs, celts, germans, and possibly even latins for all we know.

That all said, males who uniformly fall into the R1a(M458??) Hg definitely are not close to, let alone identical to, ancient celts genetically.

I found your comment to be very interesting, to tell the truth, it actually had more relevant information than the blog-post itself!!! Haha!

Great info, keep it coming and cheers from California.

P.s. The blog-post was good as well and provided a nice picture, I wasn't trying to be offensive haha