Exploration May Be Near Naymlap Tomb 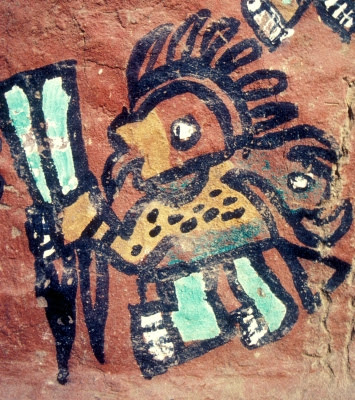 Figure found on mural near site.


Among the most colorful pre-Columbian Peruvian legends is of Naymlap, fearless founder of a centuries-old dynasty that supposedly ruled the Lambayeque Valley in northern Peru.
Archaeologist Christopher Donnan’s revelations about the legend are detailed in a new 268-page book that was just published by the UCLA Cotsen Institute of Archaeology Press, Chotuna and Chornancap: Excavating an Ancient Peruvian Legend.
According to UCLA:

As the legend goes, Naymlap arrived with a vast fleet of balsa rafts carrying an entourage that included a chief wife and many concubines. He also brought with him an idol made of green stone, and he built a palace where it was installed. In his court were a trumpeter who blew through shells much prized by the Indians; a servant who scattered the dust of pulverized seashells on the ground where Naymlap tread; and servants who tended his every need, from an official bather to the keeper of his feathered shirts.

Throughout Naymlap’s long reign, the tale continued, people enjoyed peace until his death, kept secret by his attendants who — fearing that his followers would find out their venerated leader had succumbed to this human fate — buried him in the same room where he had lived. Saddened by his mysterious disappearance, many of his followers abandoned their homes to find him.

Donnan and his UCLA team of students and fellow archaeologists found a wealth of ceramics, burials, colorful wall murals and other materials in an area that once was the location of domestic dwellings, pyramids, palace complexes, walled enclosures and a room-filled site. In other words, the archaeologist said, “What we found was perfectly in keeping with the legend.”
Click here for the complete article.
Posted by Gregory LeFever at 5:31 PM