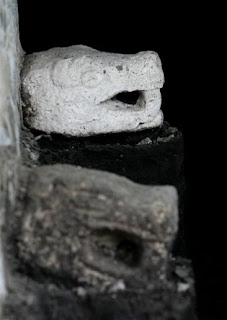 No Aztec ruler’s tomb has ever been found, but archaeologists are optimistic that the recent discovery of a ceremonial platform in Mexico City might lead them to such a tomb.

According to Latino Fox News:

Researchers have been on a five-year quest to find a royal tomb in the area of the Templo Mayor, a complex of two huge pyramids and numerous smaller structures that contained the ceremonial and spiritual heart of the pre-Hispanic Aztec empire.

"That is what the historical sources say," he said, referring to accounts written by Roman Catholic priests who accompanied the Spanish soldiers in the 1521 conquest. "Of course, now we have to find archaeological evidence to corroborate that."

The platform is about 15 yards in diameter and probably was built around A.D. 1469. It is still being unearthed and is covered with at least 19 serpent heads, each about a half-yard long.
Click here for the complete article.
Photo shows two of the platform's serpent heads.
Posted by Gregory LeFever at 10:39 AM