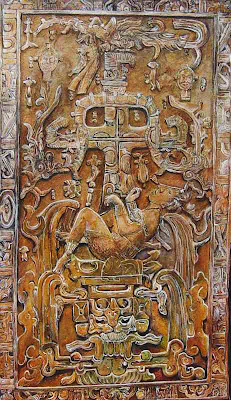 The governments of Mexico and Guatamala are cooperating with filmmakers who contend there is proof of contact between the Mayan civilization and extraterrestrials.

"Mexico will release codices, artifacts and significant documents with evidence of Mayan and extraterrestrial contact, and all of their information will be corroborated by archaeologists," according to Raul Julia-Levy, producer of “Revelations of the Mayans 2012 and Beyond,” due for release next year.
Luis Augusto Garcia Rosado, minister of tourism for the Mexican state of Campeche, said new evidence has emerged "of contact between the Mayans and extraterrestrials, supported by translations of certain codices, which the government has kept secure in underground vaults for some time." He said among the evidence is proof of landings pads in the jungle that are 3,000 years old.
The Guatemalan government has joined the project as well, giving access to artifacts and newly discovered prophecies. While the Guatemalan government is not offering information about aliens, it has joined Mexico in supporting the project.
"Guatemala, like Mexico, is home to the ancient yet advanced Mayan civilization and has also kept certain provocative archeological discoveries classified, and now believes that it is time to bring forth this information in the new documentary," Guatemala's minister of tourism, Guillermo Novielli Quezada, said in a statement. He said the country was working with filmmakers "for the good of mankind."
Click here for the complete article.
Photo shows ancient Mayan sarcophagus lid with astronaut-like image.
Posted by Gregory LeFever at 1:44 PM

So Good post and i will follow you Blog and i hope to follow my blog AncientGreece.Me and see more about Maps of Ancient Greece for Students thanks a gain admin ,,,