Mexican Footprints May Be 25,000 Years Old 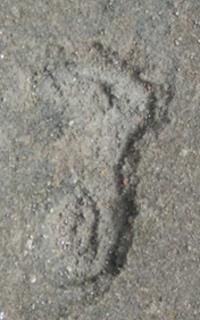 Five human footprints that may be as old as 25,000 years have been discovered in Chihuahua in northern Mexico. Specialists say they could belong to the first men who lived in this region.

The footprints correspond to three adults and a child that probably lived in the caves that are located in the sierra, in the Valle de Ahuatos, eight kilometers from the town of Creel, in Chihuahua, according to Art Daily.
According to morphoscopic analysis, Footprint 1, by its longitude of 26 centimeters, corresponds to the right foot of a male adult, while Footprint 2 belongs to the left foot of another adult, but the gender is difficult to determine. Footprint 3 was made by the right foot of an infant three or four years old.
Footprints 4 and 5 are from another adult and represent the only pair that corresponds to the same person. These footprints are significant as they have six toes, which may be due a malformation, researchers said.
Click here for the complete article.
Photo shows one of the prints.
Posted by Gregory LeFever at 5:24 PM