Many Ancient Marble Statues Were Painted 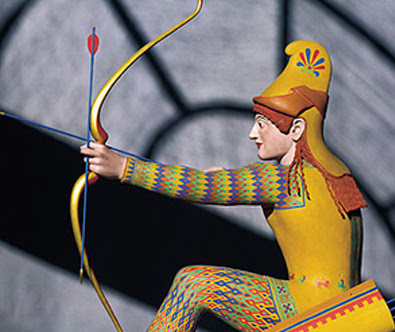 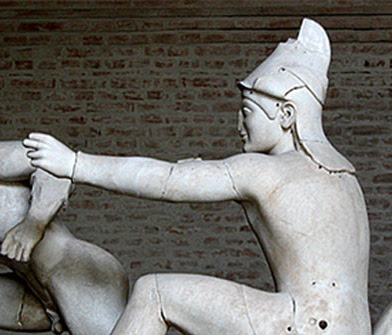 Archer from Temple of Athena with painted surface.
Research at Stanford University is revealing that many ancient Greco-Roman sculptures were not displayed in their marble whiteness, but instead were brightly painted.
According to Past Horizons in interviewing the university’s Ivy Nguyen:

Though we still think of ancient Greece and Rome in terms of white marble sparkling under a hot Mediterranean sun, a new exhibition shows a Greco-Roman lady as she was meant to be seen – in technicolor. Not everyone may take to Stanford’s painted lady, but first impressions can change. “It’s very different – some have called it kind of garish,” admitted Nguyen, but she confesses that she’s gotten used to it.

We’ve always known that ancient statues were painted: The Metropolitan Museum of Art has a vase, circa 360-350 B.C., depicting a man painting a statue of Herakles. The most important evidence is on the statues themselves – traces of paint that time did not wash from the creases and crevices in porous marble.

Nguyen’s research indicates the marble surfaces were painted, but cannot detect how many coats of paint the ancients may have applied to the sculptures.
Click here for the article and a video.
Posted by Gregory LeFever at 8:00 PM


Thanks for sharing such a nice information through your blog .. so please keep writing like this .


Thanks for sharing such a super blog. It is very helpful to choose statues thank you for keeping it up

you’re really a good webmaster. The web site loading speed is incredible. It seems that you are doing any unique trick. In addition, The contents are masterwork. you have done a wonderful job on this topic!

Thanks for sharing this blog. keep sharing!!

Awesome blog. Our variety of Marble Statue in Jaipur is crafted using vibrant color and care is taken that we should carve the real expression. Which are portrayed in different posture? Our offered range comprises devotional idol and sculpture that are carefully designed by our skilled craftsmen.

Thank you for sharing Useful informationWe are finest exporters of godss statue. In this statue ram is standing with her wife Sita and brother Laxman are standing in blessing postures.