Search Under Way for Mesopotamian Marshands 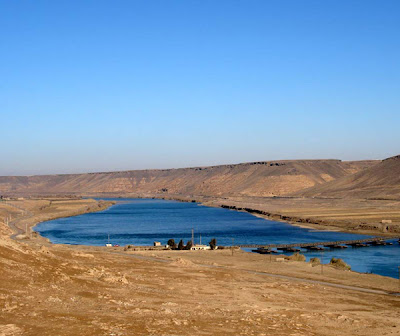 
Ancient Sumerian scrolls noted that the first cities humans built between the Tigris and Euphrates rivers were constructed on huge marshlands ~ an area today marked only by deserts and scattered settlements.
But below the surface, according to a team of researchers, lie what could be new evidence of the remains of ancient man-made systems and settlements that defined the beginnings of urbanization and the foundations of the great Mesopotamian civilizations that followed.
According to Popular Archaeology:

Preliminary surveys and investigations began last year when a team of three researchers, assistant professor of anthropology Carrie Hritz of Penn State University, Jennifer Pournelle, research assistant professor, School of the Environment, University of South Carolina, and Jennifer Smith, associate professor of geology, Washington University in St. Louis, carried out research of the Tigris-Euphrates delta region to find traces that would help them initiate an exploration of the connection between wetland resources and the emergence of some of the first cities.

They are looking at archaeological sites from the 4th millennium, B.C. up to the Islamic period.

"We were looking for evidence of past marshland and shoreline environments," said Hritz. "I and colleague Dr. Jennifer Pournelle, identified possible features such as possible ancient beach ridges on satellite imagery and were hoping to verify that on the ground. We found some evidence for preserved ancient field systems in the former marshes but were unable to provide a relative date."

"The early period of settlement is always linked to the development of agriculture." Hritz said at the annual meeting of the Society of American Archaeology on March 31. "Southern Mesopotamia is one of the earliest locations to provide evidence for the importance of irrigation agriculture in the rise of social complexity.”
Click here for the complete article.
Posted by Gregory LeFever at 6:37 PM