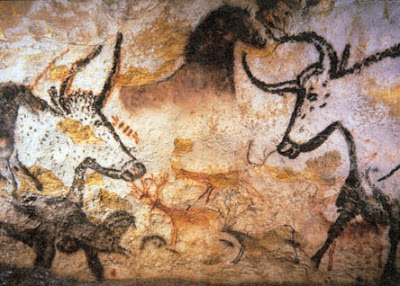 A small section of art in the Chauvet Cave.


Researchers have turned to the DNA of Europe’s long-extinct cave bear to solve controversy surrounding the age of the spectacular art in the Chauvet Cave of southeastern France.
Following its discovery in 1994, radiocarbon dating suggested the cave’s images were around 30,000 years old ~ nearly twice as old as the Lascaux cave art in southwestern France. The archaeological world rapidly was polarized, with many agreeing with the 30,000-year-old date, while other archaeologists said the dating was seriously flawed.
According to New Scientist:

To try to settle the controversy, Jean-Marc Elalouf of the Institute of Biology and Technology in Saclay, France, and his team have turned to the remains of cave bears. Along with mammoths and other huge mammals, cave bears (Ursus spelaeus) dominated the European landscape until the end of the last ice age.

The Chauvet cave contains several depictions of cave bears, and Elalouf argues that these must have been painted while the bears still thrived in the area. To pin down when the bears disappeared, his team collected 38 samples of cave bear remains in the Chauvet cave and analyzed their mitochondrial DNA.

They found that almost all the samples were genetically similar, suggesting the cave bear population was small, isolated and therefore vulnerable. Radiocarbon dating showed the samples were all between 37,000 and 29,000 years old, hinting that by the end of that period they were extinct, at least locally.

Martina Pacher of the Commission of Quaternary Research in Vienna, says cave bears became extinct at least 24,000 years ago. "So the results at Chauvet are not surprising, and I agree with their conclusions," she says.
Click here for the complete article.
Posted by Gregory LeFever at 10:35 AM