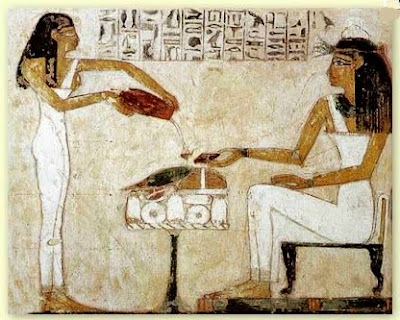 Ancient Egyptian depiction of royal beer drinking.
Africa’s ancient Nubians were using the antibiotic tetracycline 2,000 years ago, likely obtaining it in the beer they had consumed since early childhood. Large doses of the drug ~ which was officially patented in the United States in 1950 ~ have been found in mummies dating back to 350 AD.
According to Discovery News:

Some of the first people to use antibiotics, according to the research, may have lived along the shores of the Nile in Sudanese Nubia, which spans the border of modern Egypt and Sudan.

“Given the amount of tetracycline there, they had to know what they were doing,” said co-author George Armelagos, a biological anthropologist at Emory University in Atlanta. “They may not have known what tetracycline was, but they certainly knew something was making them feel better.”

Armelagos was part of a group of anthropologists that excavated the mummies in 1963. His original goal was to study osteoporosis in the Nubians, who lived between about 350 and 550 A.D. But while looking through a microscope at samples of the ancient bone under ultraviolet light, he saw what looked like tetracycline -- an antibiotic that was not officially patented in modern times until 1950.

At first, he assumed that some kind of contamination had occurred.

“Imagine if you're unwrapping a mummy, and all of a sudden, you see a pair of Ray Ban sunglasses on it,” Armelagos said. “Initially, we thought it was a product of modern technology.”

Scientists were able to trace the source of the antibiotic to grain that was contaminated with a type of mold-like bacteria called Streptomyces. Grains that are stored underground can easily become moldy with Streptomyces contamination, though these bacteria would only produce small amounts of tetracycline on their own when left to sit or baked into bread. Only when people fermented the grain would tetracycline production explode.
Nubians both ate the fermented grains as gruel and used it to make beer.
Click here for the Discovery News article.
Posted by Gregory LeFever at 1:38 PM

Recently scientists have found that parasite worms that cause diseases such a river blindness and lymphedema have bacteria in them that are susceptible to antibiotics in the tetracycline class. Possibly the ancient Numbians were lacing the beer with tetracycline to treat or prevent such filariases.

Interesting point, Eric. And if the tetracycline developed in the beer naturally, the Nubians may have successfully avoided these awful diseases.

Thanks for stopping by a taking the time to comment!