Aborigines May Have Been First to Settle Americas 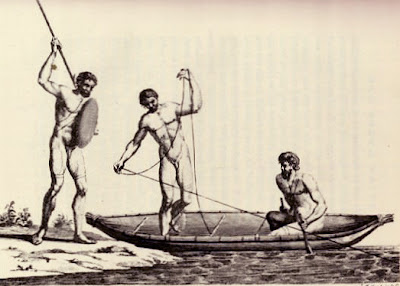 Australian Aborigines on Botany Bay by Arthur Phillip, 1790.
Scientists now say there is compelling evidence that two different populations first colonized the Americas, the earliest being Australian Aborigines over 11,000 years ago.
Cranial features distinctive to Australian Aborigines are present in hundreds of skulls uncovered in Central and South America, according to evolutionary biologist Walter Neves of the University of São Paulo.
The second population to arrive ~ up to now regarded as the first migration to the Americas ~ was humans of East and North Asian origin who entered the Americas from Siberia across the Bering Strait and founded modern Native American populations, he argues. It has been believed that these Asian people spread steadily southward to eventually populate Central and South America as well.
“The results suggest a clear biological affinity between the early South Americans and the South Pacific population,” Neves says. “This association allowed for the conclusion that the Americas were occupied before the spreading of the classical Mongoloid morphology in Asia.”
According to Cosmos magazine:

Until about a decade ago, the dominant theory in American archaeology circles was that the 'Clovis people' ~ whose culture is defined by the stone tools they used to kill megafauna such as mammoths ~ was the first population to arrive in the Americas.

They were thought to have crossed the Bering Strait from Siberia into Alaska at the end of the last Ice Age, some 10,000 or so years ago, following herds of megafauna across a land bridge created as water was locked up in glaciers and ice sheets.

But in the late 1990s, Neves and his colleagues re-examined a female skeleton that had been excavated in the 1970s in an extensive cave system in Central Brazil known as Lapa Vermelha. Dubbed Luzia, the skeleton is between 11,000 and 11,400 years old. “We believe she is the oldest skeleton in the Americas,” Neves said.
Click here for the complete article.
Posted by Gregory LeFever at 5:46 PM