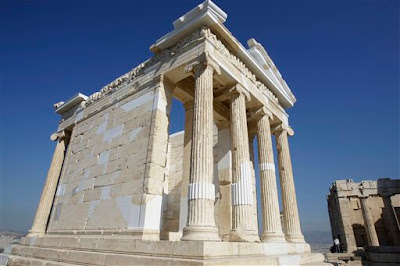 The temple during the restoration process.
The Greek temple of Athena Nike on the Acropolis is now fully restored, following a decade-long facelift. Built between 427–424 B.C. ~ while Athens was fighting Sparta for control of the Greek world ~ the building was dedicated to the city's patron goddess Athena in her capacity to bring victory in battle.
According to the Associated Press, the compact temple survived intact until the late 17th century, when it was demolished to provide material for a gun emplacement. It was rebuilt after Greece's independence from Ottoman rule in 1829.

Athena Nike had two dates with restoration crews over the last two centuries — one in 1935, another in the 1830s — and the latest top–to–bottom refurbishment was aimed to fix mistakes from previous restoration efforts for good.

"We have used the latest technology, following successful experimentation with stress and aging," project head Dionysia Mihalopoulou told the Associated Press. "The choice and use of materials was the best possible, they will not corrode."

Starting in 2000, workers took down 315 marble sections weighing up to 2–1/2 tons, laying bare a concrete foundation slab that was replaced by a stainless steel grid. Crews replaced the concrete additions with sections of new marble from ancient quarry sites ~ whose brilliant white contrasts with the old stone's patina in places like the walls and columns to make clear they are modern additions.

Every block was returned to the original position selected by the temple's ancient architects.
Click here for the Associated Press article.
Posted by Gregory LeFever at 12:06 PM