Ancient Amazonia Was Home to Millions 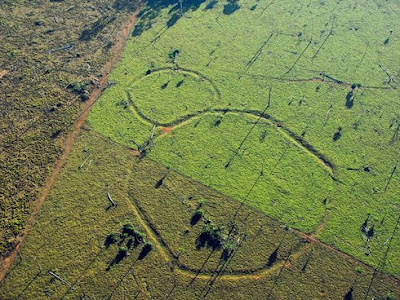 Traces of ancient Amazonian structures visible by satellite.
Instead of virgin jungle untouched by humans, the Amazon forest was home to a spectacular civilization capable of managing the jungle and cultivating crops to feed perhaps 20 million people, according to recent archaeological researchers.
According to the Washington Post:

The findings are discrediting a once-bedrock theory of archaeology that long held that the Amazon, unlike much of the Americas, was a historical black hole, its environment too hostile and its earth too poor to have ever sustained big, sedentary societies. Only small and primitive hunter-gatherer tribes, the assumption went, could ever have eked out a living in an unforgiving environment.

But scientists now believe that instead of stone-age tribes, like the groups that occasionally emerge from the forest today, the Indians who inhabited the Amazon centuries ago numbered as many as 20 million, far more people than live here today. “There is a gigantic footprint in the forest,” said Augusto Oyuela-Caycedo, 49, a Colombian-born professor at the University of Florida who is working this swath in northeast Peru.

The evidence is not just here outside tiny San Martin de Samiria, an indigenous hamlet hours by speed boat from the jungle city of Iquitos, according to the Post article. It is found across Amazonia.

Along the Xingu, an Amazon tributary in Brazil, Michael Heckenberger of the University of Florida has found moats, causeways, canals, the networks of a stratified civilization that, he says, existed as early as A.D. 800.

In Bolivia, American, German and Finnish archaeologists have been studying how pre-Columbian Indians moved tons of soil and diverted rivers, major projects of a society that existed long before the birth of Christ.
Click here for the Washington Post article.
Posted by Gregory LeFever at 12:02 PM