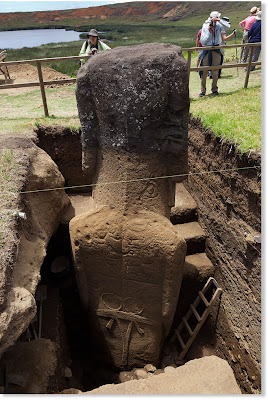 
Researchers have long been aware that many of the nearly 900 statues on Easter Island are full-bodied, but now are seeing that some of the petroglyphs carved into excavated statues are considered unique.
According to the director of the Easter Island Statue Project, Jo Anne Van Tilburg:

"While many statues have individual petroglyphs, these and only one other statue—of over 1,000 we have documented—have multiple petroglyphs carved as a composition on their backs.  Underlying these carvings is a complex symbol found on less than 100 statues. It is referred to by previous researchers as the ‘ring and girdle’ design, and sometimes said to represent the ‘sun and rainbow.’

She also says the excavation sites offer new "strong evidence" of how the Rapa Nui ancestors managed to manipulate the heavy statues into place with limited technological resources.

In addition, Dr. Van Tilburg wrote that her team has found tuna vertebrae near the bottom of a recent excavation. The evidence backs up claims from Easter Island's Rapa Nui community that the original statue carvers were rewarded for their efforts in meals of tuna and lobster.
Click here for the complete article.
Posted by Gregory LeFever at 11:32 PM