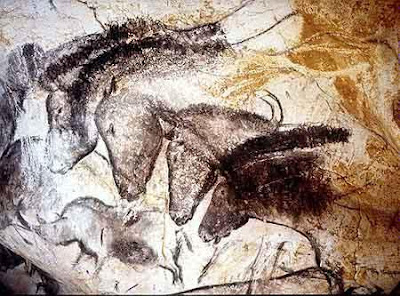 Section of paintings from the Chauvet cave.

French scientists say they have confirmed that the ancient paintings in the Chauvet cave ~ discovered in southern France in 1999 ~ are “the oldest and most elaborate ever discovered.”
Scientists originally used radiocarbon dating of the rock art, charcoal and animal bones in the Chauvet cave to place them between 30,000 to 32,000 years old.

Later, other scholars dated the paintings at 12,000 to 17,000 years old, based on their artistic sophistication. That would place them as relics of the Magdalenian culture, in which human ancestors used tools of stone and bone and created increasingly advanced art as time went on.
In the new research being published in the Proceedings of the National Academy of Sciences, a US journal, French scientists believe they have confirmation that the paintings are "the oldest and most elaborate ever discovered." Their findings are based on geomorphological and chlorine-36 dating of the rockslide surfaces around what is believed to be the cave's only entrance.
"Remarkably agreeing with the radiocarbon dates of the human and animal occupancy, this study confirms that the Chauvet cave paintings are the oldest and the most elaborate ever discovered, challenging our current knowledge of human cognitive evolution," said the study.
Click here for the complete article.
Posted by Gregory LeFever at 8:18 PM

These drawings are amazing in more ways than can be imagined. These people drew anatomically correct animals with no way to view the animals they were drawing except by memory. They were artist in the truest sense.