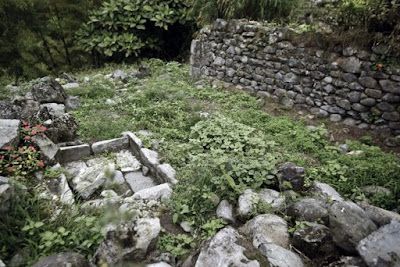 Funereal stones mark the site of the possible tomb.


The long-sought tomb of the final Inca emperor may have been located. "This is an absolutely important find for the history of Ecuador's archeology and for the (Andean) region," said Patrimony Minister Maria Fernanda Espinosa, speaking of the ruins found by Ecuadoran historian Tamara Estupinan.
According to the AFP news agency:

It was back in June 2010 that Estupinan, now a researcher with the French Institute for Andean Studies (IFEA), found what she describes as an "Inca archeological site" high on the Andes' eastern flank amid plunging canyons. Nearby are a small local farm and a facility for raising fighting cocks.

But in the area called Sigchos, about 45 miles south of Quito, up on a hill dotted with brush, there is more -- much more: she found a complex of walls, aqueducts and stonework that lie inside the Machay rural retreat. Machay means burial in the Quechua language.

"This is a late imperial design Inca monument that leads to several rectangular rooms that were built with cut polished stone set around a trapezoidal plaza," Estupinan explained to AFP.

This year Ecuador's state Cultural Patrimony Institute will start work on a promising archeological site, and Estupinan will be front and center to raise the curtain on a massive complex sprawling over a ridge at 1,020 meters.

The Inca empire, in the 1400s and early 1500s, spanned much of South America's Andean region. The emperor Atahualpa was the last of his dynasty. During the Spanish conquest he was captured, pressed into Christianity, and then the Spanish executed him by strangulation. After his death in 1533, the Incan empire began to fall apart.
Click here for the complete article.
Posted by Gregory LeFever at 1:46 PM