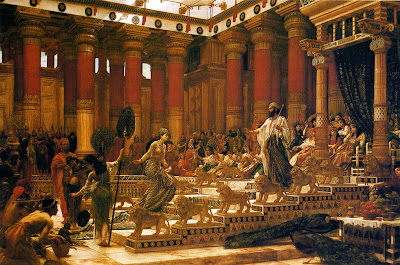 
British archaeologists digging in northern Ethiopia have unearthed what may be the source of gold the biblical Queen of Sheba presented to King Solomon. The ruler of Sheba ~ modern-day Ethiopia and Yemen ~ is said to have traveled to Jerusalem about 3,000 years ago with vast quantities of gold to give to King Solomon.
Archaeologist Louise Schofield, former British Museum curator, who headed the excavation on the high Gheralta plateau in northern Ethiopia, said: "One of the things I've always loved about archaeology is the way it can tie up with legends and myths. The fact that we might have the Queen of Sheba's mines is extraordinary."
According to Biblical Archaeology magazine:

Although little is known about her, the queen's image inspired medieval Christian mystical works in which she embodied divine wisdom, as well as Turkish and Persian paintings, Handel's oratorio Solomon, and Hollywood films. Her story is still told across Africa and Arabia, and the Ethiopian tales are immortalised in the holy book the Kebra Nagast.

Hers is said to be one of the world's oldest love stories. The Bible says she visited Solomon to test his wisdom by asking him several riddles. Legend has it that he wooed her, and that descendants of their child, Menelik – son of the wise – became the kings of Abyssinia.

Among the evidence was a 20-foot stone stele carved with a sun and crescent moon, the "calling card of the land of Sheba," Schofield said. "I crawled beneath the stone – wary of a 9-foot cobra I was warned lives here – and came face to face with an inscription in Sabaean, the language that the Queen of Sheba would have spoken."
Click here for the complete article.
Posted by Gregory LeFever at 11:00 AM