Is Leather Bible Really the Gospel of Barnabas? 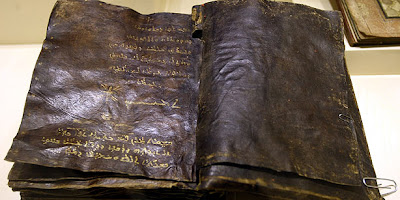 
A leather, handwritten Bible believed to be 1,500 years old may be the much-debated Gospel of Barnabas, some researchers believe. According to Turkish media reports last week, the Bible was seized from a gang smuggling artifacts in southern Turkey in 2010.
Media reports said the copy of Bible in Ankara may be a copy of the Gospel of Barnabas, which Muslims claim is an original gospel that was later suppressed. The oldest copies of this gospel date back to the 16th century and are written in Italian and Spanish.
According to Today’s Zaman.com:

The Gospel of Barnabas contradicts the canonical New Testament account of Jesus and his ministry but has strong parallels with the Islamic view of Jesus. Much of its content and themes parallel Islamic ideas, and it includes a prediction by Jesus of the Prophet Muhammad coming to earth.

Ömer Faruk Harman, a theology professor, said the Gospel of Barnabas treats Jesus as a human being and prophet not a God, rejects the trinity and crucifixion of Jesus and includes a prediction about Prophet Muhammad’s coming to Earth.

Aydoğan Vatandaş, a Today’s Zaman journalist and author who has written two books on the Gospel of Barnabas, said there is no clue that the Bible mentioned in the Turkish press dates back to 1,500 years ago, but he said it is sure that the Gospel of Barnabas had been written in the Aramaic language and Syriac alphabet. “There is only one Gospel that exactly matches this definition: the ‘Gospel of Barnabas’ that was found in a cave in Uludere in Hakkari [now of Şırnak] in the early 1980s by villagers.”

Scientific examinations are hoped to reveal whether the Bible in Ankara is the Gospel of Barnabas.
Click here for the complete article.
Posted by Gregory LeFever at 9:17 AM

An explosive and courageous novel - a first of its kind - addresses this very issue and the Muslim obsession with the Gospel of Barnabas. The book, A Deceit To Die For will be available on Kindle Wednesday of this week. Don't miss it. www.lukemontgomery.net