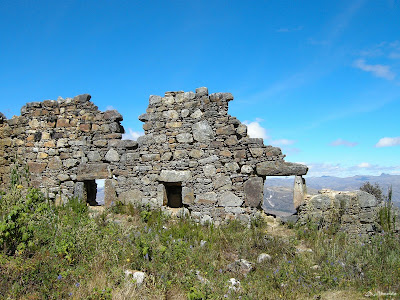 A cooperative effort of the Peruvian government and the Global Heritage Fund aims to conserve and restore the mysterious ancient site of Marcahuamachuco. Built over 1,600 years ago atop a mesa at 10,000 feet, archaeologists call the site ~ known for its impressively massive castillos and circular double-walled structures ~ the "Machu Picchu of the North."
According to Popular Archaeology:

Built around 400 A.D. and lasting until 800 AD, Marcahuamachuco was the center of a Pre-Incan civilization and thought to have been ancient Peru's most important economic, political, spiritual, and military center during that time period. Some of the site's functions still remain a mystery, but scholars suggest that it was a religious oracle for the population, later used as a sacred burial ground.

The site consists of several major compounds surrounded by curved stone walls, in some places as much as 12 meters high, with interior plazas, rooms and galleries that are interpreted by archaeologists to have served ceremonial and administrative functions.

But over the years, its impressive remains have fallen prey to the elements, both natural and human-derived, such as weathering, plant growth, livestock grazing, and lack of conservation.

"It is one of Peru's most important archaeological treasures, and like so many of the country's top heritage sites, it has suffered in the shadow of Machu Picchu for too long," says Jeff Morgan, executive director of the GHF. “With excellent potential to be one of the first UNESCO World Heritage Sites in the northern highlands of Peru, Marcahuamachuco will provide a major focus for economic development in an area with few opportunities for local communities."
Click here for the complete article.
Posted by Gregory LeFever at 7:38 PM