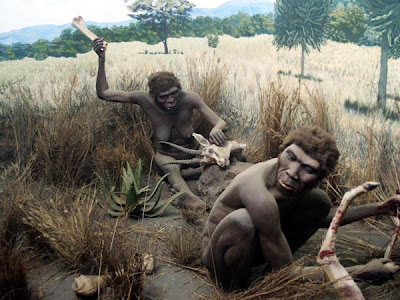 Homo erectus models from Kenya National Museum.
Scientists are questioning the long-held belief that early humans migrated solely from Africa. An even earlier group of Homo erectus may have migrated instead from Eurasia to Africa.
Much of the new speculation regarding humans’ earliest migrations comes from Dmanisi, a major archaeological site in the mountains in the Republic of Georgia, between Europe and Asia. Evidence now points to human occupation there some 1.85 million years ago, substantially earlier than previously believed.

"The recently discovered data show that Dmanisi was occupied at the same time as ~ if not before ~ the first appearance of Homo erectus in east Africa," team leader Reid Ferring of the University of North Texas tells the Associated Press. "We do not know as yet what the first occupants looked like, but the implication is that they were similar to, or possibly even more primitive than those represented by Dmanisi's fossils."

The occupants of Dmanisi "are the first representatives of our own genus outside Africa, and they represent the most primitive population of the species Homo erectus known to date," according to David Lordkipanidze of the Georgia National Museum. The early humans at Dmanisi "might be ancestral to all later H. erectus populations, which would suggest a Eurasian origin of H. erectus."
Click here for complete article.
Posted by Gregory LeFever at 10:22 AM

The original article is no longer available, could you please post what it was so readers can look it up?

If this happens again, you often can find an original of an article by using Google's "exact words" search capability within Advanced Search. Just type in 10 or 12 words exactly as they appear in the article and Google will provide the link, if it exists.

Glad you find this article of interest.