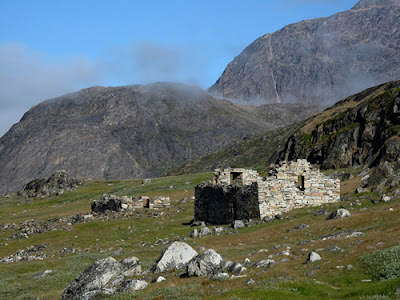 Ruins of a Norse church in Greenland.
New research shows that a “Little Ice Age” likely prompted Norse Vikings to vacate their settlements in Greenland ~ which they had established around 980 AD ~ around the year 1100.
Researchers have recreated the climate during a span of 5,600 years, through the mid-1300s, using data from lakes near the Norse settlement in western Greenland. Cooling started around the year 1100, dropping 7 degrees Fahrenheit in 80 years. The change could have shortened the crop growing season and increased sea-ice levels enough to impede sea travel.

"This is the first quantitative temperature record from the area they were living in,” study researcher William D'Andrea, now at the University of Massachusetts–Amherst, said in a statement. “So we can say there is a definite cooling trend in the region right before the Norse disappear.”

“Suddenly, year after year, you go into this cooling trend, and the summers are getting shorter and colder and you can't make as much hay. You can imagine how that particular lifestyle may not be able to make it,” D'Andrea said.

Disappearance of the Norse from Greenland could also be due to other factors, including their dependence on trade, combative relationships with their neighbors and sedentary lifestyle, the researchers said.
Click here for the complete article.
Posted by Gregory LeFever at 10:23 AM