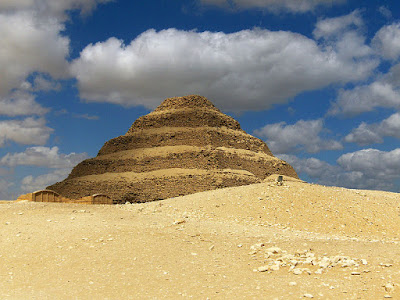 Several of the new finds are in the area of Saqqara.
At least 17 pyramids, 1,000 tombs, and 3,000 settlements ~ all previously unknown ~ have been revealed through use of an infra-red satellite survey of Egypt. Initial excavations have confirmed some of the findings, including two of the suspected pyramids.
“We were very intensely doing this research for over a year,” Dr. Sarah Parcak tells the BBC. She has pioneered the work in space archaeology from a NASA-sponsored laboratory in Birmingham, Alabama. “I could see the data as it was emerging, but for me the a-ha moment was when I could step back and look at everything that we'd found.”
The team analyzed images from satellites orbiting 700km above the earth, equipped with cameras so powerful they can pinpoint objects less than 1m in diameter on the earth's surface. According to the BBC, ancient Egyptians built their houses and structures out of mud brick, which is much denser than the soil that surrounds it, so the shapes of houses, temples and tombs can be seen.
"These are just the sites [close to] the surface,” Parcak says. “There are many thousands of additional sites that the Nile has covered over with silt. This is just the beginning of this kind of work.”
Click here for the complete article and photos.
Posted by Gregory LeFever at 7:49 PM

Man, did the satellites discover them? Wow! I think today's technology has really been emerging. I wonder what other things and discoveries can satellite surveys do and find. Hmm.