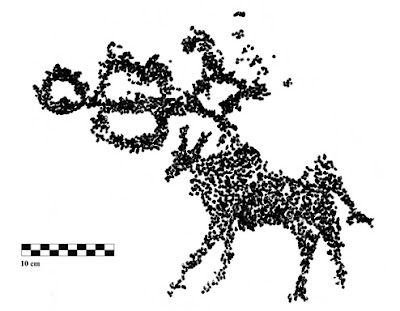 
Dozens of rock art drawings that defy scientific explanation have been discovered in Sudan’s Bayuda Desert. Some were etched more than 5,000 years ago.
Archaeologists discovered 15 new rock art sites in an arid valley known as Wadi Abu Dom, 18 miles from the Nile. Some of the sites revealed just a single drawing while others have up to 30, said lead researcher Tim Karberg of the Westfälische Wilhelms-Universität Münster in Germany.
According to LiveScience.com:

A number of the images appear to date back around 1,500 years ago, to a period when Christianity was spreading in Sudan. They include depictions of crosses, a church, which may show a nearby, ancient monastery called al-Ghazali, and one remarkable picture of a knight riding an animal with horns.

“One is a depiction of an armed rider, with a lance and a shield, a kind of knight depiction," Karberg said, suggesting this may be an image of St. George, the legendary soldier said to have slain a dragon.

Drawings of St. George are known from Sudan and texts discussing him have been found within the country. “Our texts attest to the popularity of the Saint in Christian Nubia,” wrote historian Gerald Brown, in a study he did on the subject.

The team also found detailed representations of cattle at Wadi Abu Dom that, based on rock drawings found at other sites, are probably from the late Bronze Age.  During this time, more than 3,000 years ago, the northern parts of the country were occupied by the Egyptian empire.
Click here for the complete article.
Posted by Gregory LeFever at 10:36 AM