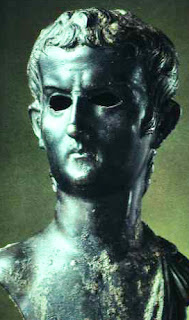 Caligula’s lost tomb has been found due to Italian police arrested a man smuggling a statue of the notorious Roman emperor recovered from the site.

Caligula ruled from 37 to 41 AD and was described by contemporaries as insane. He had sex with his sisters, appointed his horse as a consul and killed many for pleasure. He was killed by his Praetorian guard at 28.
According to The Guardian:

Officers from the archaeological squad of Italy’s tax police had a break last week after arresting a man near Lake Nemi, south of Rome, as he loaded part of a 2.5 metre statue into a lorry. The emperor had a villa there, as well as a floating temple and a floating palace; their hulks were recovered in Mussolini's time but destroyed in the war.

The police said the statue was shod with a pair of the "caligae" military boots favoured by the emperor – real name Gaius Julius Caesar Augustus Germanicus; as a boy, Gaius accompanied his father on campaigns in Germany; the soldiers were amused he wore a miniature uniform, and gave him his nickname Caligula, or "little boot.”

The statue’s rare Greek marble, throne and god's robes convinced the police it came from the emperor's tomb. Under questioning, the tomb raider led them to the site, where excavations have begun.
Click here for the complete article.
Posted by Gregory LeFever at 6:27 PM