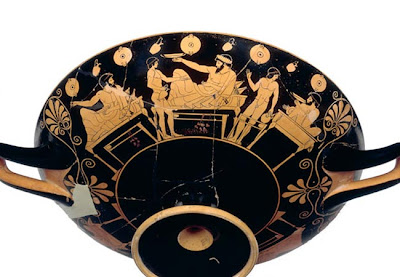 Kylix cup from 600 BC shows men's drinking party.
Ancient Athenian cocktail parties ~ called symposia ~ went from being events exclusively for elites, to being open to all citizens, and then in the 4th Century BC back to displays of conspicuous consumption most could not afford.
The wine cups used during these gatherings reflect this story, according to Kathleen Lynch, a University of Cincinnati professor of classics. The cups were central to the symposia, where every participant drank the same amount of wine mixed with water, as they reclined on couches or mattresses set in a circle or square, according to LiveScience.com.

"In the same way that the coffee mug with 'World's Greatest Golfer' in your kitchen cabinet speaks to your values and your culture, so, too, do the commonly used objects of the past tell us about that past," Lynch said.

As the social context went full circle from elite party to common practice and back again, the appearance of the cups evolved as well, from simple and stemless to a profusion of styles to knockoffs that imitated the appearance of silverwork.

From 1,100 to 700 B.C., the symposia were reserved for the elite, and grave markers for the very wealthy were even made to resemble the mixing bowls used to blend wine and water during the parties.
Click here for the complete article.
Posted by Gregory LeFever at 5:59 PM