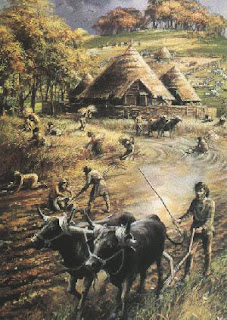 New research points to southern Croatia as the hub for early farmers who spread their agrarian lifestyle from the Middle East into Europe. With the arrival nearly 8,000 years ago of settlers already adept at growing crops in the Middle East, farming sprouted swiftly along the coastal region called Dalmatia, says archaeologist Andrew Moore of Rochester Institute of Technology in New York.
Moore’s research team has uncovered evidence of intensive farming at Pokrovnik and Danilo Bitinj, two Neolithic settlements in Dalmatia. Plant cultivation and animal raising started almost 8,000 years ago at Pokrovnik and lasted for close to a millennium, according to radiocarbon dating of charred seeds and bones from a series of occupation layers.
According to Science News:

Other evidence supports a fast spread of sophisticated farming methods from the Middle East into Europe, remarks Harvard University archaeologist Ofer Bar-Yosef. Farming villages in western Greece date to about 9,000 years ago, he notes. Middle Eastern farmers exploited a wide array of domesticated plants and animals by 10,500 years ago, setting the stage for a westward migration, Bar-Yosef says.