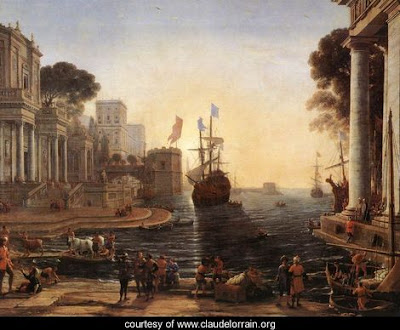 Ulysses Returns Chryseis to her Father ~ Claude Lorrain, 1648.
Greek archaeologists claim they’ve found the palace of Odysseus during excavations on the island of Ithaca in the Ionian Sea. Archaeologist Thanasis Papadopulos, who has been leading the excavation effort on Odysseus' home island for 16 years, says he has known the palace’s location since 2006.
“We found the ruins of a three-level palace with a staircase carved into the rock,” Papadopulos says. His team also found a well dating back to 13th century BC, when the Trojan War is believed to have taken place.
He says the discoveries are identical to those described in Homer's Odyssey, presumably written during 8th century BC.
The Greek Ministry of Culture has provided more funding for the continuation of the excavations. The mayor of Ithaca, Spiros Arsenis, has stated that Papadopulos' discovery is easily one of the most important discoveries in modern archeology, as reported by the Russian news agency RIA Novosti.
Click here for the Novinite.com article.
Please check "comments" for more detail on the painting.

Posted by Gregory LeFever at 5:29 PM

Looks like the painting was done by this guy: http://en.wikipedia.org/wiki/Claude_Lorrain

If this is so, would it not make the city Troy instead of Ithaca? Seeing how Chryseis and her father were both Trojans and the return of daughter to father occured during the Trojan War?

I can't tell if both "Anonymous" are the same person, but whatever the case, thank you! Yes, the original one I posted was the Claude Lorrain painting (although the ClaudeLorrain.org website dates it as 1648.)

And yes, it would be Troy, most likely. However, I'm going to leave this version posted because, though it's not truly relevant to the article, it's a beautiful painting and I want to keep your comments here to show how helpful people can be.

Again, I appreciate your setting me straight on this painting.

I meant no disrespect in 'setting you straight'. :)

I just figured you'd appreciate the extra information the same way I would appreciate someone 'setting me straight'.

And you're right... it is a beautiful painting.

I sensed no disrespect whatsoever. I very much appreciate your help. Thank you again.