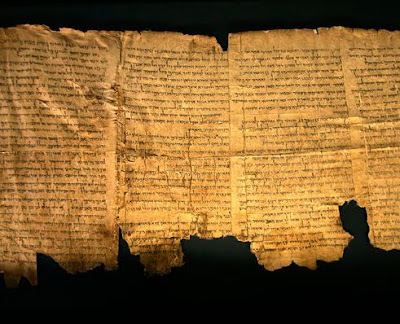 Section of the scrolls recently on display in Jerusalem.
New research indicates the Dead Sea Scrolls ~ discovered some 60 years ago in caves near the ancient settlement of Qumran ~ may have originated elsewhere. And instead of the scrolls being the work of a Jewish sect called the Essenes, the actual authors may have come from several Jewish groups, including those fleeing Jerusalem during the Roman siege circa 70 A.D.
"Jews wrote the Scrolls, but it may not have been just one specific group,” archaeologist Robert Cargill tells National Geographic News. An article on the magazine’s website states:

Recent findings by Yuval Peleg, an archaeologist who has excavated Qumran for 16 years, are challenging long-held notions of who wrote the Dead Sea Scrolls. Artifacts discovered by Peleg's team during their excavations suggest Qumran once served as an ancient pottery factory. The supposed baths may have actually been pools to capture and separate clay.

And on Jerusalem's Mount Zion, archaeologists recently discovered and deciphered a two-thousand-year-old cup with the phrase "Lord, I have returned" inscribed on its sides in a cryptic code similar to one used in some of the Dead Sea Scrolls.

To some experts, the code suggests that religious leaders from Jerusalem authored at least some of the scrolls.

The Essenes may have actually been Jerusalem Temple priests who went into self-imposed exile in the second century B.C., after kings unlawfully assumed the role of high priest. They may have escaped to Qumran to worship God in their own way. While there, they may have written some of the texts that would come to be known as the Dead Sea Scrolls.
Click here for the article.
Posted by Gregory LeFever at 8:28 PM