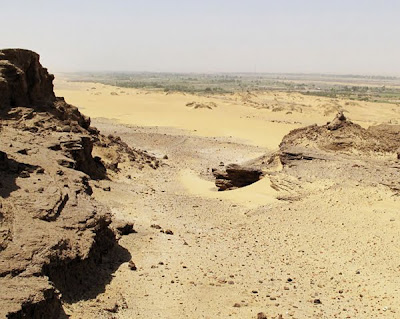 Section of the ancient trade route near Darb el-Arbain.
Discovery of a 3,500-year-old settlement in a desert oasis indicates existence of vibrant ancient desert trade routes stretching from the Mediterranean into Sudan during the early days of the Egyptian civilization.
The settlement at Umm el-Mawagir in Egypt's Kharga Oasis ~ more than 300 miles south of Cairo ~ has been excavated for the past year by a Yale University expedition, whose initial findings suggest it was an administrative post with massive baking facilities, possibly to feed local troops.

"The amount of bread production was pretty amazing," said John Darnell, head of the expedition, citing discoveries of ovens, bread molds and storerooms at the site, far out of proportion to its size. "It's probably a good bet they were basically baking enough bread to feed an army, literally," he said.

The site was home to a few thousand inhabitants and also includes remnants of mudbrick buildings, similar to those used for administrative purposes in the Nile Valley to the east, suggesting close contact between the two regions.

According to the Associated Press, the ancient routes stretched from the Darfur region in Sudan through the oases and the Nile Valley up to the ancient Palestine and Syria, with long caravans of donkeys bringing wines, luxury goods and wealth along with them. It would at least be 1,000 years before the camel made its appearance.
Click here for the complete Associated Press article.
Posted by Gregory LeFever at 5:40 PM