A tablet from 564 A.D. found beneath the main temple of the ancient Mayan city El Perú-Waka’ in northern Guatemala reveals what archaeologists describe as a “dark period” in Mayan history, including the violent story of a 6th-century “snake queen.” 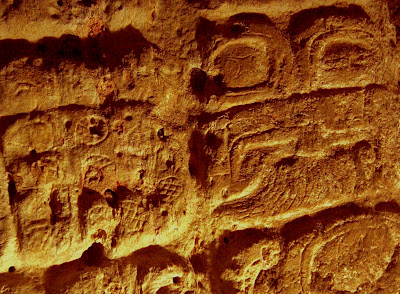 The stone tablet stood exposed to the elements for a hundred years, before being buried as an offering in a funeral for another queen. Epigrapher Stanley Guenter, who deciphered the text, believes the tablet was dedicated by King Wa’oom Uch’ab Tzi’kin, a title that translates roughly as “He Who Stands Up the Offering of the Eagle.”

“The information in the text provides a new chapter in the history of the ancient kingdom of Waka’ and its political relations with the most powerful kingdoms in the Classic period lowland Maya world.”

Lady Ikoom was a predecessor to one of the greatest queens of Classic Maya civilization, the seventh-century Maya Holy Snake Lord known as Lady K’abel who ruled El Perú-Waka’ for more than 20 years with her husband, King K’inich Bahlam II.

She was the military governor of the Wak kingdom for her family, the imperial house of the Snake King, and she carried the title “Kaloomte,” translated as “Supreme Warrior,” - higher in authority than her husband, the king.

Around the year 700, Stela 44 was brought to the main city temple by command of King K’inich Bahlam II to be buried as an offering, probably as part of the funeral rituals for his wife, queen Kaloomte’ K’abel.

Image: A portion of the newly discovered tablet.
Click here for the article.
Posted by Gregory LeFever at 12:07 PM

Thank yyou for this