Ashes of Ancient Halls Made Into Mounds

Archaeologists in England have unearthed the burned remains of two massive 6,000-year-old buildings whose ashes were shoveled into piles to make burial mounds.

"The buildings seemed to have been deliberately burned down," says Julian Thomas, a professor at the University of Manchester who’s leading the excavation. Researchers believe these halls of the living may have been transformed into "halls of the dead" after a leader or important social figure died. 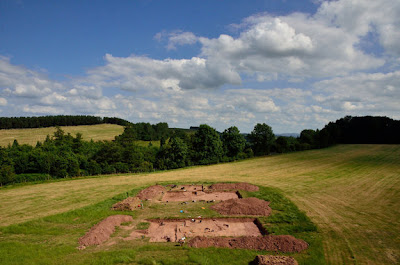 The remnants were uncovered in an open field near Dorstone Hill in Herefordshire. For decades, amateur archaeologists have noticed pieces of flint blades in the area and wondered whether the land there contained relics of a long-forgotten time.
According to LiveScience.com:

When Thomas and his team began excavating, they found two large burial mounds, or barrows, that could have held anywhere from seven to 30 people each.

The smaller barrow contained a 23-foot-long (7 meters) mortuary chamber with sockets for two huge tree trunks. Digging deeper, the researchers uncovered postholes, ash from the timbers, and charred clay from the walls of an ancient structure.

These burnt remains came from what were once two long-halls, the biggest of which was up to 230 feet (70 m) long, with aisles delineated by wooden posts and several internal spaces. 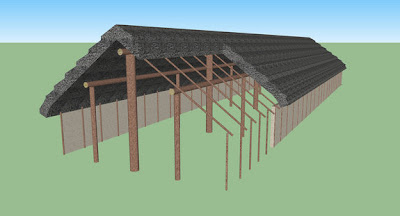 It’s not clear who built the halls and barrows, though the building construction is similar to that found in England between 4000 B.C. and 3600 B.C, predating the construction of Stonehenge by a millennium.

Click here for the article.
Artist's conception of one of the long halls.

Posted by Gregory LeFever at 3:43 PM

You may have heard about the Jaguariuna incident, in which a book was discovered beside a hundred thousand year old mummy. When the book was translated by Pentagon's code-breaking computers, the archaeologists involved in the project went missing. Only one of them re surfaced, a guy called Ronald Bradshaw, who wrote the book The Tale of Atlantis.
your blog makes fascinating read.